New Delhi. The name of Anushka Sharma has been in the news a lot for the last few days. Team India captain Virat Kohli and his family are being trolled fiercely after India’s two consecutive defeats in the ICC T20 World Cup 2021. Along with this bad trolling, now some funny trolling of Anushka and Virat is also happening. And the reason for this is a cricketer named Anushka Sharma. In fact, the Women’s U19 One Day Challenger Trophy has started in India from November 2. The opening match of this tournament was played between India B and India at the RCA Academy Ground in Jaipur. In this match, India B is being commanded by Anushka Sharma, who remains in the headlines. 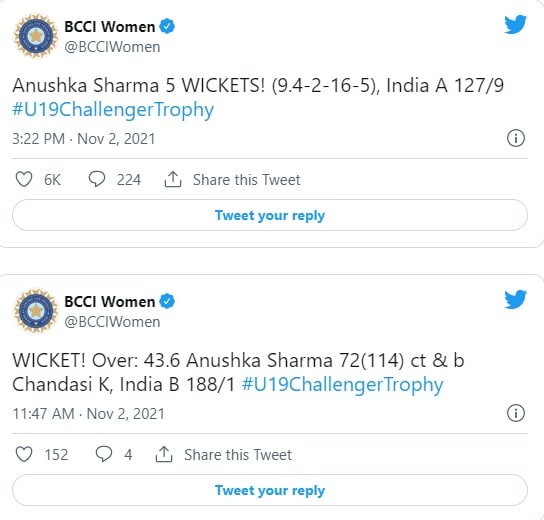 Young Indian cricketer Anushka Brijmohan Sharma is originally from Madhya Pradesh women’s cricket team. Anushka has performed brilliantly in many ODI tournaments before, but now she has come into the limelight when she was told about her performance from the BCCI Women’s Twitter handle. India A, India B, India C and India D are playing four teams in the Women’s Under-19 ODI Challenger Trophy.