New Delhi. Pakistan’s dream of winning the T20 World Cup for the second time was shattered. He was defeated by Australia (AUS vs PAK T20 World Cup) by 5 wickets in the semi-final. This was Pakistan’s first defeat in the tournament and this defeat ended their journey to the T20 World Cup. The Pakistan team won the hearts of everyone with their passion and sportsmanship throughout the tournament. But there was one player whose spirit and courage are being appreciated the most. He is the wicket-keeper batsman of the team, Mohammad Rizwan (Mohammad Rizwan in ICU). This is because, even after two days in the ICU, Rizwan decided to enter the semi-final match and scored a 52-ball 67 against Australia.

Before the match, people did not know that Rizwan was admitted in the hospital. Later some of his pictures went viral on social media. Then it came to know that just before the semi-final this wicket-keeper batsman was very ill. Pakistan’s batting consultant Matthew Hayden himself revealed during the semi-final that Rizwan was in ICU due to lung infection 24 hours before the match. But he entered the semi-finals and scored a brilliant half-century. It shows that he is the real warrior. They have amazing courage.

Rizwan was in ICU for 2 days before semi-final
Pakistan team doctor Najeeb Somru also later revealed that Rizwan was in ICU for 2 days due to chest infection. He said, “Mohammed Rizwan had a serious chest infection on November 9, after which he was admitted to the hospital. He spent 2 nights in ICU. But he recovered fast and was found fit after all kinds of tests before the match. We can see his strong intention, which shows his spirit to perform for the country. The decision regarding his health was taken by the entire team management. It was about the morale of the entire team and that’s why we didn’t make this information public.”

Despite being ill, Rizwan played the semi-finals
During the match against Australia, there was swelling on Rizwan’s face. Despite this, he batted and wicket-keeping in the match. Captain Babar Azam and Shoaib Akhtar also praised his spirit. The Pakistan captain said, “Definitely he is a dedicated player for the team. The way he played today was extraordinary. I saw him, he looked a little weak. But when I asked him about his health, he said no, I will play. I am very confident about his attitude and his performance.”

T20 World Cup: Babar Azam told the ‘small’ mistake that got Pakistan out of the T20 World Cup

Shoaib Akhtar also praised Rizwan by tweeting
Shoaib Akhtar also shared Rizwan’s hospital picture and tweeted, Can you imagine that this man played for his country today and gave his best. He was in the hospital for the last 2 days. In fact, respect for him increased even more. real hero. 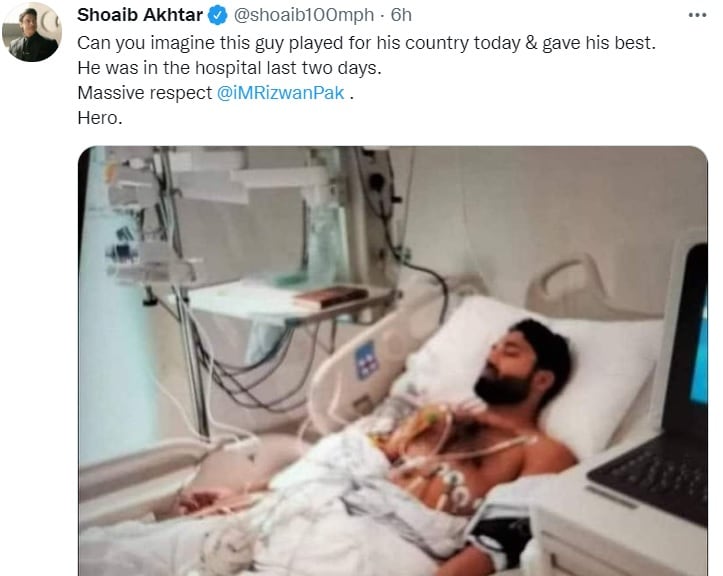 Rizwan scored 281 runs in 6 matches of T20 World Cup at an average of 70. He also scored 3 half-centuries in the tournament.