On the one hand, the magic of the Indian Premier League (IPL) is going on in India, while on the other hand, Cheteshwar Pujara is doing wonders one after the other in county cricket. Playing for Sussex, Pujara seems to have recovered his lost form and has scored hundreds in three consecutive matches. The match between Durham and Sussex is going on in County Championship Division-2, the third day of this match is going to be very special for India and Pakistani cricket fans. When the second day’s play ended, Rizwan was present with Pujara at the crease. A partnership of 12 runs has been seen between these two so far, but the fans will expect to see a big partnership between the two on the third day.

Pujara scored 128 while Rizwan returned not out after scoring five runs. Talking about the match, Durham was reduced to 223 runs in the first innings. In reply, on the basis of Pujara’s century, Sussex made 362 runs for five wickets. Sussex are currently leading by 139 runs. Pujara was not included in the Test squad for the Test series against Sri Lanka. After this Pujara went to play in the Ranji Trophy, but there too he did not get any special runs from his bat. 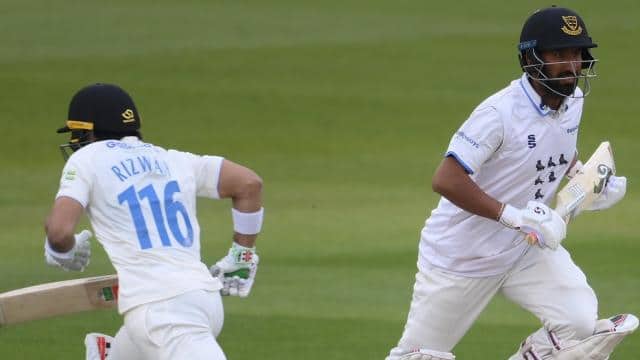 Pujara silenced critics in England, scored a century in the third consecutive match