New Delhi. australia ash series (Ashes Series) You have made your name. Australia won the third test match by an innings and 14 runs and ended in 3 days. Australia team to England (Australia vs England) He was bundled out for 185 runs in the first innings, in response to which Australia scored 267 runs in the first innings. In the second innings, the England team was bundled out for 68 by the Australian bowlers and ended the match in 3 days. After this, Australian female journalist Kole Amanda Bailey called former England captain Michael Vaughan. (Michael Vaughan) replied to.

Actually Vaughan had teased Team India two years ago, now the female journalist gave him a befitting reply. In fact, in 2019, against New Zealand in Hamilton ODI, Team India could only score 92 runs. After this Vaughan took a jibe at Team India. Vaughan had tweeted that India 92 all out. Can’t believe any team will get out for less than 100 these days. 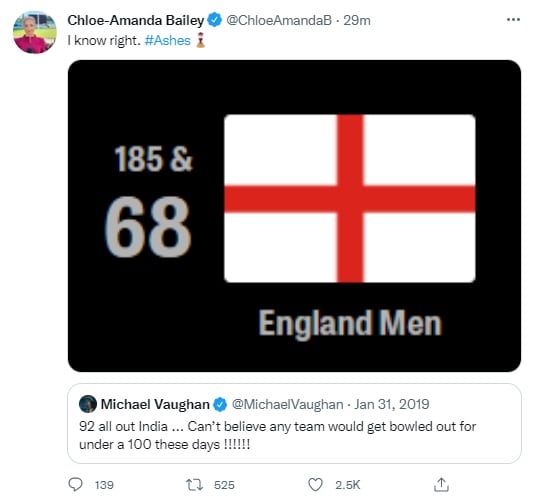 Joe Root, who took more salary than Virat, became the worst captain of England, lost both respect and series

Now the Australian journalist replied to his tweet and put a screenshot of England’s score and said that I know correctly. Talking about the match played between India and New Zealand in Hamilton in 2019, in this match, Bolt took 5 wickets for 21 runs and also took 2 catches. Rohit Sharma was leading the team in this match. Yuzvendra Chahal scored the highest 18 runs for India in this match. While talking about the third match of the Ashes, Australia’s Scott Boland was the man of the match in his debut match. Boland took 6 wickets for 7 runs in the second innings.