London. England pacer Tim Bresnan has apologized for his claims of scolding Azim Rafiq, but has denied any racial remarks about his former Yorkshire teammate. Rafiq shared his experiences of racism and discrimination while speaking in front of the Digital, Culture, Media and Sports Committee of MPs on the previous day. In his testimony as a witness, Rafiq, 30, claimed that Bresnan often made racist remarks about him.

Along with this, he claimed that he was among those 6 or 7 players who used to flaunt him. Bresnan said in a statement released on Twitter that I apologize for any role I may have played in any experience harassing Azim Rafiq at Yorkshire. 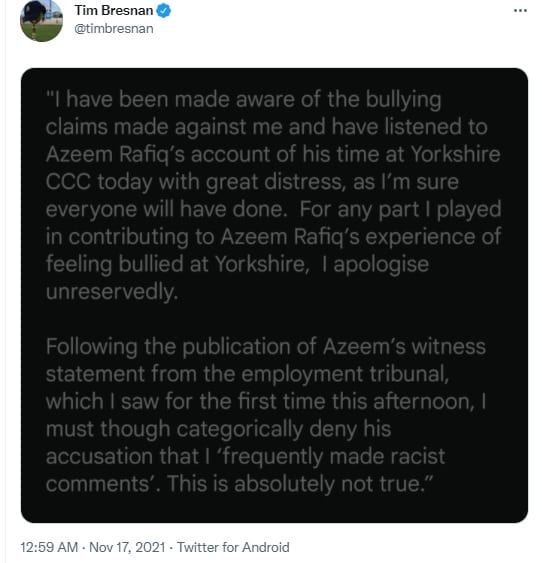 Bresnan denies Azim’s allegations
He said that I saw Azim’s statement before the tribunal only in the afternoon and I refute his allegations that I often made racist remarks against him. Azim Rafiq had said during the hearing that Joe Root is a good person. He never used racial language. I felt worse because he lived with Gary Balance. Maybe they don’t remember.

IND vs NZ: The debut of Rohit Sharma’s captaincy and the connection of Jaipur is very old

Balance, a former England international, admitted that he had called Rafiq a paki (a term used for Pakistanis), but added that he said it in a friendly joke. Azim Rafiq said in his statement that players of Asian origin were called by the name Kevin. He said that Gary Balance used to call people of other color by the name Kevin