New Delhi. Mahendra Singh Dhoni is one of the most famous and followed cricketers in the world. The former India captain has a huge fan base. His fans are always eager to get a glimpse of him. Recently, there is speculation on the social media platform that Dhoni will come on the big screen. A picture going viral on social media has surprised the audience and the reason for this is Bollywood’s villain Gulshan Grover. He has shared a picture with Dhoni from his official Twitter handle and has written something like this, due to which the fans are suspecting Dhoni’s debut in the film.

Fans are wondering and speculating whether Dhoni will be seen on screen with Akshay Kumar and Katrina Kaif in Rohit Shetty’s much-awaited film ‘Sooryavanshi’. Ready to share? This picture of Gulshan Grover is becoming increasingly viral on social media and fans are also commenting fiercely on it.

Actually, this picture of Dhoni and Gulshan Grover is being told from the set of the film ‘Sooryavanshi’. Gulshan Grover has also given such a caption to the picture, which further increased the curiosity of the fans. He wrote, “What on the sets of #Sooryavanshi with brother @msdhoni? Is MS Dhoni acting in the film or is he filming in the same studio? @Akshay Kumar.” On this tweet, fans are also giving their opinion about Dhoni working in films. 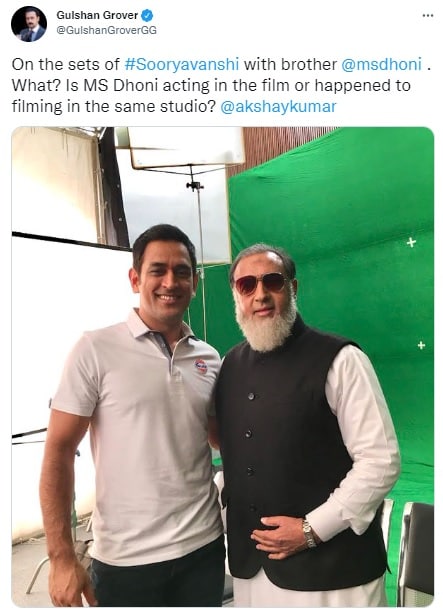 Let us tell you that Mahendra Singh Dhoni is currently working as a mentor of Team India in the ongoing ICC T20 World Cup 2021 in the United Arab Emirates. Recently, India’s wicketkeeper-batsman Dinesh Karthik had pointed out similarities between Dhoni and England’s white-ball captain Eoin Morgan. After England’s win over Sri Lanka, he said that Morgan’s value to the England team was as much as Dhoni’s value to Team India.

T20 World Cup: Team India got its first win of T20 World Cup due to these 5 reasons, hopes of semi-finals increased

Team India has not had a pleasant performance in the mega event so far. The team has lost its first two out of three matches so far and has been heavily criticized for its disappointing performance. India had to face defeat by 10 wickets at the hands of Pakistan in the first match. After this, in the second match, New Zealand defeated Team India by 8 wickets. However, in the third match, Team India made a comeback. They beat Afghanistan by 66 runs.

IPL 2022: 7 players fit to take over the captaincy of RCB in place of Virat Kohli

IPL 2022 KL Rahul and Rashid Khan may be banned for one year amid retention before Mega Auction | IPL 2022: Will KL...

IPL 2022: 7 players fit to take over the captaincy of RCB in place of Virat Kohli

IPL 2022 KL Rahul and Rashid Khan may be banned for one year amid retention before Mega Auction | IPL 2022: Will KL...