IND vs NZ Harbhajan slams selectors for not naming 2 batters in Team India: Whats the point of Ranji Trophy

New Delhi. Veteran off-spinner Harbhajan Singh is not happy as the Indian selection committee has ignored Sheldon Jackson and Mandeep Singh. India’s T20 International team for the home series against New Zealand (India vs New Zealand) and India A team for the tour of South Africa were announced on Tuesday, but Jackson and Mandeep did not find a place in either of them. Harbhajan did not like to find a place for these two in the team. Harbhajan pointed to the figures of the last two Ranji seasons and Jackson returning to Saurashtra this season. He said that he has failed to understand what more a right-handed middle-order batsman needs to do to be good enough for at least the India A team.

Harbhajan Singh made two separate tweets on Sheldon Jackson and Mandeep not being selected. In these tweets, he asked about the domestic records of these two players and questioned the selectors, he tweeted for Sheldon Jackson and wrote, “854 runs in Ranji season 2018/19 and 809 runs in 2019/2020. And that year also Ranji champions and current form this year… not yet selected for India A team. Can selectors tell him what else he needs to do to play for India apart from scoring runs #shameful.”

Sheldon Jackson shares dressing room with Harbhajan for Kolkata Knight Riders. He has scored a hat-trick of fifties in the ongoing Syed Mushtaq T20 tournament. Despite being in excellent form in domestic cricket for the last several years, he is not getting a chance in Team India. 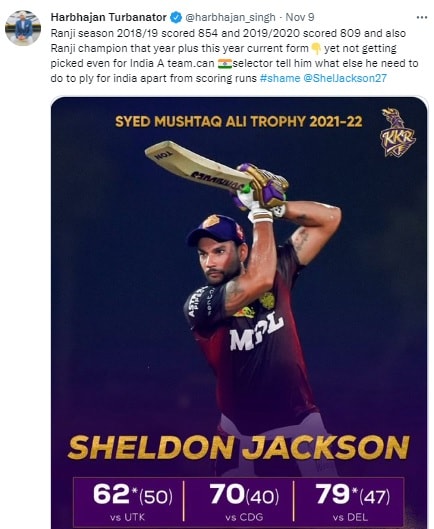 Harbhajan did not stop here. He asked the selectors to start watching more home matches, as he did not name Punjab captain Mandeep Singh in the India A team. Harbhajan shared screenshots of Mandeep Singh’s impressive numbers in the Ranji Trophy 2019-20. Last year, the Ranji Trophy could not be held due to the Kovid-19 epidemic.
T20 World Cup 2021: Sania Mirza is being trolled after Pakistan’s defeat

He tweeted, “Another top player didn’t get a chance after his performance. Mandeep Singh. Forget Team India, not even in India A. The selectors need to look at the records of some domestic matches otherwise what is the point of having a Ranji season. Check out their stats played in the last domestic season. Cricket did not happen in 20/21 due to Corona. Shocking.” Let us inform that after Virat Kohli’s withdrawal from the shortest format, the BCCI has named Rohit Sharma as India’s T20 International captain. KL Rahul has been made the vice-captain. Rituraj Gaikwad, Harshal Patel, Venkatesh Iyer, Avesh Khan, Akshar Patel have also been kept in the team. Gaikwad and Iyer had a good performance in the Indian Premier League (IPL) 2021 and hence were rewarded. Virat Kohli, Ravindra Jadeja, Jasprit Bumrah, Mohammed Shami have been rested for the T20I series against New Zealand. Fast bowler Mohammad Siraj also earned a call-up in the T20I squad along with Deepak Chahar.

The India A team will be led by Priyank Panchal, which includes players like Devdutt Padikkal, Ishan Porel and Rahul Chahar.