New Delhi. Virat Kohli and head coach Rahul Dravid can’t believe what they did after the Indian captain was given out lbw by the third umpire in the second test match between India vs New Zealand (IND vs NZ). saw. TV umpire Virender Sharma gave Virat Kohli out, while it can be clearly seen in the replay that it was not out. Commenting VVS Laxman also said, I thought it was the inside edge and the ball has deviated. Virat also appeared angry after this decision and he also talked to the umpire, but he had to return to the pavilion.

India and New Zealand The second and final Test match of the series is being played at the Wankhede Stadium in Mumbai. In the match that started late due to rain, India had taken the lead in the beginning, but New Zealand spinner Aijaz Patel made a comeback by taking three wickets one after the other. Captain Virat Kohli returned to the crease after the dismissals of Shubman Gill and Cheteshwar Pujara. In the 30th over of India’s innings to Kohli, Aijaz Patel’s ball went to the front pad and after appealing to the New Zealand players, the on-field umpire declared him out.

IND vs NZ: Wrong out given to Virat Kohli? ‘Injustice’ happened as soon as he returned to the field! View VIDEO

Soon after umpire Anil Choudhary raised a finger Virat Kohli Took Drs. Replays showed Kohli got the inside edge, but it was difficult to ascertain whether the ball hit the pad before hitting the bat or the impact occurred at the same time. TV umpire Virender Sharma watched several replays and from different angles before deciding to stick with the on-field umpire’s decision, as the evidence with him was inconclusive. Three raids appeared on the big screen and Kohli was given out, but the captain was not happy with this decision.

Before running into frustration, Kohli had a brief conversation with the on-field umpires. Even coach Dravid had a look of surprise on his face as the replays were being watched on the TV screen next to him in the dressing room. At the same time, the fans were also unhappy with this decision. Kohli was seen discussing the decision with Dravid after going into the dressing room as Aijaz Patel rocked India with two wickets in the over. He also lost a review due to Kohli’s unsuccessful referral.

Wasim Jaffer said, “In my opinion the bat was the first. I understand the ‘conclusive evidence’ part, but I think this was an example where common sense should have prevailed. But common sense is not so common as they say. Feeling bad for Virat Kohli. Unfortunate.” 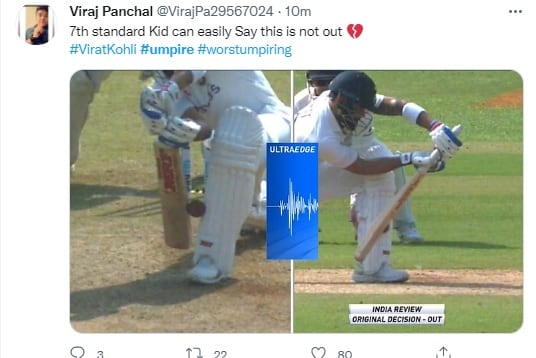 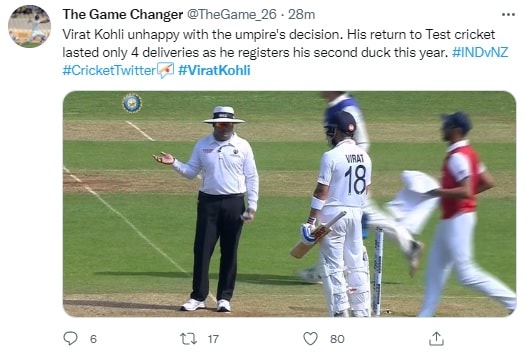 Let us inform that on the first day of the first cricket test against New Zealand, India won the toss and batted till tea, making 111 runs for three wickets. Mayank Agarwal was playing 52 and Shreyas Iyer scored seven runs. The morning session could not be played due to night’s rain. India lost the wickets of Shubman Gill (44), Cheteshwar Pujara (0) and captain Virat Kohli (0). Spinner Aijaz Patel took all three wickets.