New Delhi. India and New Zealand (India vs New Zealand) The first match of the two-Test series between Green Park Stadium in Kanpur (Green Park Stadium) is being played in. An Indian cricket fan who came to see the match in the stadium on the first day was more in discussion than the players. This fan came into the limelight when his picture was shown on TV during the live match. Within minutes, the video of a person eating gutkha became viral on social media. Former Indian batsman Wasim Jaffer on this video (Wasim Jaffer) Have fun too. Apart from this, many famous personalities have also shared the picture of the person eating gutkha on Twitter.

In the viral video, a man who came to watch the match at Green Park Stadium is seen talking on the phone. There is also a woman with him. Both of them also shake hands seeing their faces on TV. The expression on his face is such that people on social media are not tired of making his memes. Former Indian team opener Wasim Jaffer also could not stop himself from giving his reaction on this incident. He shared a funny meme with this person’s picture. 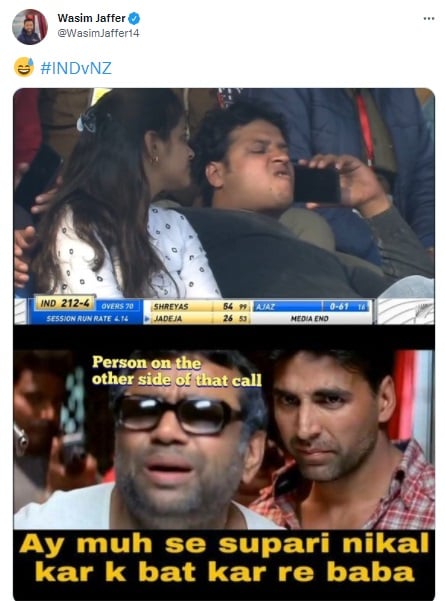 Now the Kanpur police is also looking for the young man who is enjoying the match after sitting and eating gutkha. The police has also appealed to the residents of the city to inform if this young man is identified.

Shreyas Iyer’s century on his Test debut helped India reach 339 for eight at lunch on the second day of the first Test against New Zealand on Friday. Shreyas was dismissed after scoring 105 runs and became the 16th Indian batsman to score a century in his first Test. Ravindra Jadeja scored 50 runs. For New Zealand, Kyle Jameson took three and Tim Southee took five wickets.

IND vs NZ: Ravichandran Ashwin one wicket away to breaks Harbhajan Singh recorded of most wickets in test cricket – Latest Cricket News

IND vs NZ: Ravichandran Ashwin one wicket away to breaks Harbhajan Singh recorded of most wickets in test cricket – Latest Cricket News