New Delhi. Indian women’s cricket team’s opener Smriti Mandhana (Smriti Mandhana Maiden Test Century) scored the first century of her Test career. He achieved this feat on the second day of the Day-Night Test against Australia in Carrara, Queensland (INDW vs AUSW Pink Ball Test). He completed his 100 runs by hitting a four off Alyssa Parry. Mandhana is the first Indian woman and the second cricketer overall to score a century in a pink-ball test.

Before him, Virat Kohli had done this feat in the Day-Night Test against Bangladesh in Kolkata two years ago. Mandhana got out after scoring 127 runs. In this innings, the Indian opener hit 22 fours and 1 six. This is the best Test score by any female batsman in Australia. Before him, England’s Molly Hyde played an unbeaten innings of 124 runs in Australia.

Jaffer calls Mandhana the ‘goddess of the off side’
After this innings of Mandhana, she is getting congratulations from all sides. Former Indian opener Wasim Jaffer also praised him fiercely. He called Mandhana the ‘goddess of the off side’. Like former Indian captain Sourav Ganguly was called the God of the off-side. Apart from Jaffer, BCCI and ICC also congratulated Mandhana for this achievement. 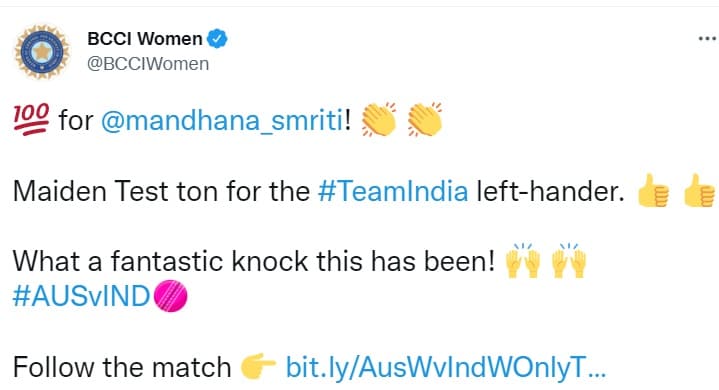 INDW vs AUSW: Smriti Mandhana was roaming around with pink ball in her bag for 3 months, interesting reason given

Mandhana had studded fifty in just 51 balls
While batting explosively on the first day of the Test match, Mandhana made a fifty in just 51 balls with the help of 11 fours. It was the second fastest fifty in women’s Test cricket. India’s Sangeeta Dabir holds the record for the fastest fifty in Tests. He scored 50 runs in 42 balls against England in 1995. According to the official score sheet of the match, Dabir’s 50 runs were completed in 42 balls. This player hit four fours in one over of Darcy Brown. Mandhana had added 93 runs for the first wicket with Shefali Verma.

Virender Sehwag told, which team will become the champion of T20 World Cup

Virender Sehwag told, which team will become the champion of T20 World Cup