New Delhi. This season of the league has been great for Chennai Super Kings (CSK), who finished seventh in IPL 2020. CSK has secured a place in the playoffs by winning 9 out of 13 matches in IPL 2021. Both the batsmen and bowlers of the team are showing amazing. Simply, the performance of captain Mahendra Singh Dhoni (MS Dhoni) is increasing the trouble of the team. This season his bat has remained silent so far. He has scored only 84 runs in 13 matches. His captaincy is also being tested with the bat. Because earlier, the Decision Review System ie DRS was called ‘Dhoni Review System’. Now they are making a mistake in that.

At least the figures of the last 10 reviews are telling this. Because the decision to take Dhoni’s review only once has come in favor of the team. Former Indian batsman and commentator Aakash Chopra has made a funny tweet about this. Akash wrote in his tweet, first Dhoni review system and now carefully review system. Dhoni against the decision of the umpire, who has taken the last 10 reviews. In only one of them, his call has been correct. 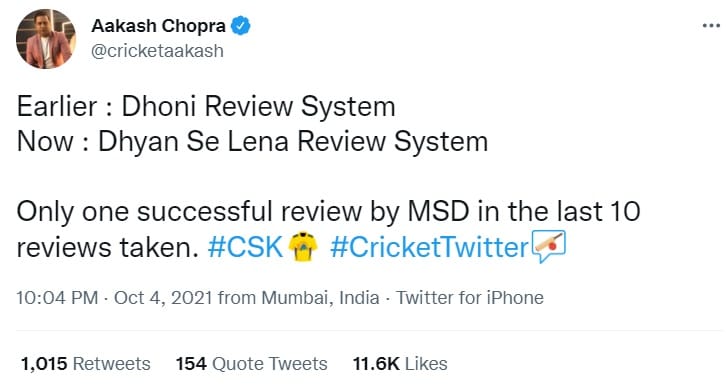 Dhoni’s review against Pant also went wrong
In the last match against Delhi Capitals also a review of Dhoni proved to be wrong. Actually, after the dismissal of Shreyas Iyer on the fifth ball of the sixth over, Delhi captain Rishabh Pant came out to bat. CSK fast bowler Josh Hazlewood had the ball in his hands. He bowled the last ball of his over to Pant. Which Pant tried to flick in his leg side. But the ball went straight into Dhoni’s gloves standing behind the wicket.

After this both Dhoni and Hazlewood appealed for the catch. But the umpire rejected it. After this Dhoni took the review. The video replay clearly showed that the ball had hit the pad instead of the bat. For this reason, this call of Dhoni became useless.

IPL 2021: The player on whom CSK spent 9 crores, became the enemy of the same team! snatched the number 1 crown

Dhoni’s review against SRH was also in vain
Earlier, in the match against Sunrisers Hyderabad, Dhoni had taken DRS against Rashid Khan on the last ball. However, Dhoni knew that the ball had hit the bat instead of the pad. But he took the review at the behest of Deepak Chahar. Umpire Nitin Menon laughed as soon as Dhoni took the review and when the result of the video replay came, it was clear that the ball had gone like a slip by taking the outer edge of the bat.

Even though Dhoni is failing to take the review. But it is not affecting the performance of his team. Because CSK won the playoff ticket by winning 4 consecutive matches in the UAE leg.