New Delhi. Royal Challengers Bangalore’s campaign in the Indian Premier League (IPL) 2021 ended with a four-wicket loss against Kolkata Knight Riders in the IPL 2021 Eliminator (IPL 2021) on Monday (October 11). . It was indeed a heartbreaking defeat, as Virat Kohli’s team had been brilliant throughout the season. RCB finished third in the league stage by winning nine out of 14 matches. Many even believed that the team would end its trophy drought this year.

However, Kolkata Knight Riders scuttled RCB’s plan in the knock-out match. Since RCB cannot go further in the competition, the focus is now on the next season. The franchise owners have to take some really big decisions as Virat Kohli will not be leading the team in the next season. Apart from this, there will be a mega auction, in which teams will be seen retaining only a few players. Apart from Virat Kohli, AB de Villiers has been one of the best performers for RCB in the last few years. That’s why many believe that RCB should retain the former South Africa captain.

However, former Australian spinner Brad Hogg is not of the same opinion. AB de Villiers will turn 38 next February. In such a situation, Hogg believes that it would be risky for the team to invest in de Villiers. Hogg expressed his views when a social media user urged RCB to give leadership responsibility to de Villiers with Kohli stepping down. The fan wrote, “If you want to play with AB de Villiers in RCB then you must know how to use him and not at number 5 or number 6. Secondly, Virat Kohli has resigned from the captaincy, so without any doubt hand over the post to AB de Villiers, otherwise leave him. I mean release them so that the other team can buy and take advantage.”
IPL 2021: Eoin Morgan eyeing Gautam Gambhir’s record, could not score a single half-century in 15 matches

Refuting this statement of the fan, the former Australian cricketer said that retaining AB de Villiers would be risky, as the batsman himself is not sure about his future. So it would be wise for RCB to put him in the auction and get him at a good price. He wrote, “De Villiers is uncertain about his future, so investing long term on him will now be risky for RCB. RCB might be wise to bring him back in the auction pool this year and let him try his luck for a bargain. 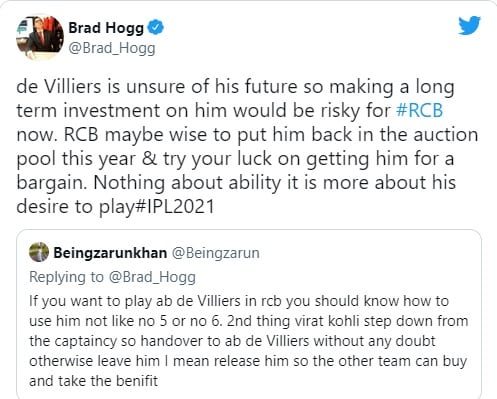