New Delhi. In the second leg of the Indian Premier League (IPL) 2021, Mumbai Indians on Tuesday won the much-needed victory over Sanju Samson-led Rajasthan Royals. After this victory, Indian opener Rohit Sharma completely imitated the three biggest icons of cricket. Known as the Hitman for his batting exploits, Rohit Sharma took some time out from his training sessions at the Mumbai Indians camp and paid special tributes to three legends of the game.

Rohit Sharma shared this special video of his on Instagram. The Mumbai Indians skipper executed some of the famous on-field actions of IPL icons – Sachin Tendulkar, Mahela Jayawardene and Harbhajan Singh. Sharing this video of his, Rohit wrote- “Friends… Teammates… Legends! Let’s see if you can guess all 3 cricketers in this reel. Stay connected with us for part two.”

Wasim Akram on coaching Babar Azam and Co, I am not stupid

This video of Rohit Sharma soon became a topic of discussion on social media. Many domestic and foreign cricketers made their own comments on this video. Some cricketers and fans guessed correctly, while some missed to recognize these legends.

Actually, Rohit Sharma has shared the dressing room with all the three icons of Mumbai Indians. While master blaster Tendulkar and spin wizard Harbhajan have been part of the Mumbai Indians team, Sri Lanka legend Jayawardene is the current head coach of the Rohit Sharma-led side in the cash-rich league. Delhi Capitals (DC) opener Prithvi Shaw and Sunrisers Hyderabad (SRH) star Rashid Khan made their respective comments on this viral video of Rohit Sharma. 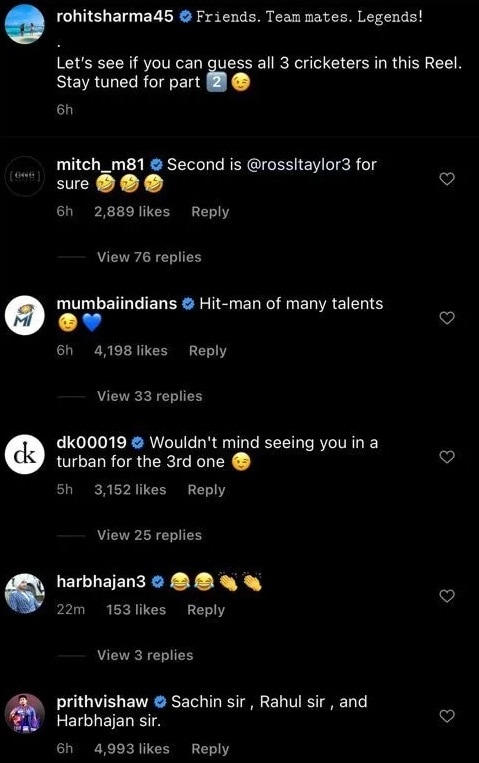 On the other hand, if we talk about Rohit Sharma-led Mumbai Indians in the 14th season of IPL, then the team is currently trying to finish fourth in the race for the playoffs in the tournament. Mumbai Indians’ hope of reaching the playoffs still remains on the basis of Ishan Kishan’s stormy innings in the match on Wednesday. The bowling of Jimmy Neesham and Nathan Coulter-Nile helped Mumbai register a massive victory over 2008 champions Rajasthan Royals in Sharjah. Mumbai Indians captain Rohit Sharma also created history by becoming the first Indian batsman to hit 400 T20 sixes in the same match.