Kavya Maran was seen smiling after the match between Rajasthan Royals and Sunrisers Hyderabad in Dubai on Monday. Hyderabad defeated Rajasthan by seven wickets in this match. Chasing 165 runs, Hyderabad won the match with 9 balls to spare. This was only the second win for Sunrisers in IPL 2021. Hyderabad is running at the bottom of the points table.

IPL 2021: Hardik Pandya said, Shami was hit by a bouncer and then the time changed

After the victory in this match, many smiling pictures of Kavya went viral on social media, which were shared by the fans. Fans shared these photos with different captions. Sharing a picture of Kavya, a fan wrote, “After so many days finally saw Kavya Maran smiling. Thank you Sunrisers Hyderabad for winning the game.” 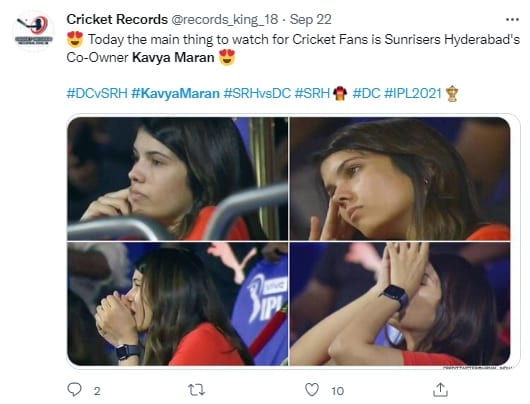 Kavya is a strong supporter of her team. He has caught the attention of many with his appearance during IPL matches in India and abroad. 29-year-old Kavya is the co-owner of Sunrisers Hyderabad franchise and associated with Sun Music and FM channels owned by Sun TV.

However, despite the presence of Lucky Charm of Sunrisers Hyderabad, the team lost most of the season badly. Their chances of qualifying for the next stage were also completely shattered with Sunrisers Hyderabad’s crushing defeat against Delhi Capitals.