New Delhi. Umran Malik was not a part of Sunrisers Hyderabad (SRH) initially but the Orange Army had to rope in him as a short-term replacement after pacer T Natarajan tested positive for COVID-19. . Before the start of IPL 2021 (IPL), he played only one List A and one T20 match. He gave 98 runs against Bengal in a match of 50 over format. However, in the T20 format, he took three wickets against the Railways. The 21-year-old made his IPL debut against Kolkata Knight Riders in Dubai and made headlines. Although he did not get a wicket, he bowled consistently at 140 kmph, even touching 150 kmph once. The Jammu and Kashmir pacer did not deceive the team even against the Royal Challengers Bangalore (RCB).

He turned out to be the most economical bowler for Sunrisers Hyderabad at the Sheikh Zayed Stadium in Abu Dhabi and made his spell with figures of 4-0-21-1. His spell also included a ball at a speed of 153 kmph. In the 9th over of RCB’s innings, Umran Malik bowled 5 consecutive deliveries at a speed of 150 kmph.

Sunrisers Hyderabad defeated Royal Challengers Bangalore on the basis of his spell. Meanwhile, Umran Malik had another reason to rejoice as Royal Bangalore Challengers captain Virat Kohli gifted him an autographed jersey after the conclusion of the match on Wednesday.

IPL 2021: West Indies’ explosive all-rounder associated with Chennai, has made his team the CPL champion

IPL 2021 KKR vs RR: The fourth team of the playoff will be decided today! Rajasthan Royals has the key

Virat Kohli praises Umran Malik
Talking to the commentators after the match, Virat Kohli lauded Umran Malik for creating good pace. The 32-year-old also talked about the importance of making young talents world champions. In the post match presentation ceremony after the match, Virat Kohli said, “It was nice to see a young man bowling at 150 speed. From here it is important to understand the progress of the player, how to see himself. We have to maximize the potential of our fast bowling stocks.” 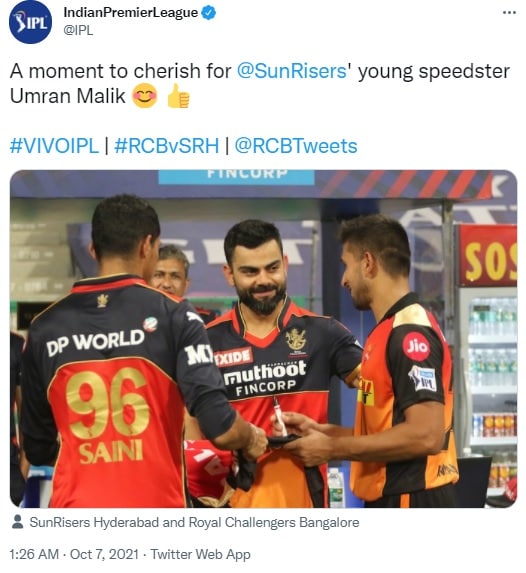 Kane Williamson calls Umran Malik special
Apart from this, Umran Malik also got praise from Sunrisers Hyderabad captain Kane Williamson. Kane Williamson was also the ‘Man of the Match’. The Sunrisers Hyderabad captain said that he was not surprised by Umran Malik’s performance in the two matches he has played so far. He said, “Umran is definitely special. We have seen him in the nets for a few seasons. Special occasions for them and it’s no surprise to see them do well as they come. Really valuable players to the team.”