New Delhi. In the 44th match of IPL 2021, Chennai Super Kings defeated Sunrisers Hyderabad (CSK vs SRH) by 6 wickets with 2 balls to spare. With this win, Mahendra Singh Dhoni’s CSK became the first team to get a place in the playoffs of this season. Dhoni shone in CSK’s win. CSK needed 3 runs in 6 balls to win in the last over. Siddharth Kaul was bowling this over for Sunrisers Hyderabad. On the fourth ball of his over, Dhoni hit a six towards deep midwicket. Just like the 2011 World Cup final. With this six, the team got the victory and the place was confirmed in the playoffs for the 11th time. There was no limit to the happiness of the fans due to this. After a long time, Dhoni finished the match with a six in his vintage style.

The Moment we all waiting for
Nothing changed man, Dhoni still finishes the match in his own style… #CSKvsSRH @MSDhoni #IPL2021 pic.twitter.com/IubNc3P8qh

This six of Dhoni created panic on social media. A few minutes after his innings, this video of the six started going viral on Twitter and there was a flood of funny memes about Dhoni. A fan tweeted Dhoni’s old statement of IPL 2020 and wrote that then Dhoni had said that we will make a strong comeback. This is our identity and today it has been proved. 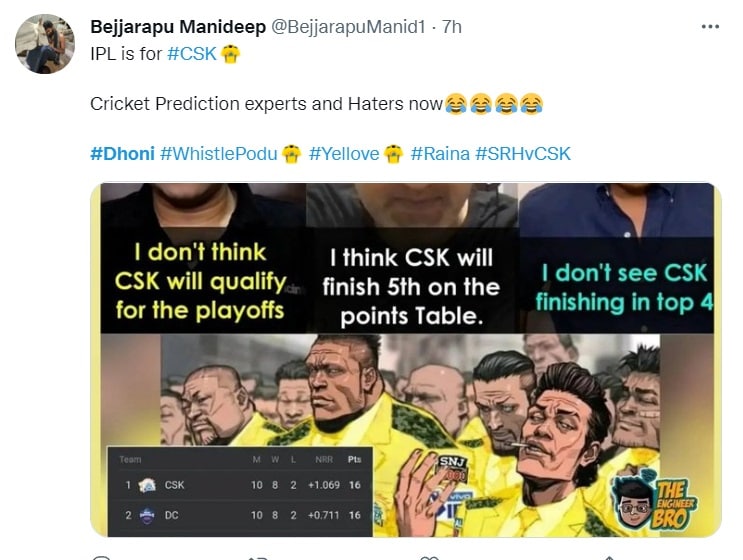 CSK’s 9th win in 11 matches
In this match, Chennai restricted Hyderabad to 134 for 7 in 20 overs and won by scoring 139 for four in 19.4 overs and became the first team to reach the playoffs. Chennai captain Mahendra Singh Dhoni hit the winning six and gave the team its 9th win in 11 matches. After the match, Dhoni said that this victory is special for us. Last season I said that we want to come back strongly and this year we have proved it. That too when we played the first half in April-May.