New Delhi. Chennai Super Kings (CSK) opener Ruturaj Gaikwad won the praise of his teammates and former Indian cricketers for his scintillating innings against Rajasthan Royals in the ongoing edition of the Indian Premier League (IPL) recently. The CSK opener scored his maiden century in Abu Dhabi with full enthusiasm. As people talked about Ruturaj’s performance with the bat against Rajasthan Royals, there were many who also discussed his love life. In the recent past, there have been reports that the CSK star is in a relationship with Marathi actress Sayali Sanjeev. However, there has been no statement of any kind on this matter from both the sides.

The discussion of this relationship started with Ruturaj’s comment, which he did on Sayali Sanjeev’s Instagram post. On this comment of Ruturaj, Sayali also responded by making a heart emoji. Since then, the fans started speculating about Ruturaj and Sayali’s relationship. After this there was no comment from both the sides in this matter. Now once again Ruturaj is in the headlines after his brilliant game in the IPL. Along with this, fans are curious to know about his love life. So let’s know who is Sayali Sanjeev, whose name is being associated with Ruturaj Gaikwad.
RCB vs SRH: Kohli’s team has a chance to make it to the top-2, but will have to register a big win

Who is Sayali Sanjeev?
Sayali Sanjeev was born on 31 January 1993 in Dhule, Maharashtra. Sayali completed her schooling from RJC Byteco High School, Nashik. He is a graduate of HPT Arts and RYK Science College in Nashiko. Sayali received the Best Actress award at a college event and that’s when she decided to pursue a career in acting. As far as his working life is concerned. She has worked for brands like Dentz, Quikr, Swarovski Gems and Birla Eyecare. Sayali made her debut in the film industry through a music video, which also starred Sushant Shellari. Sayali got her first big project in the form of Zee Marathi TV serial ‘Kahe Diya Pardes’. She played the role of ‘Gauri’ in it.

Sayali has also acted in a few films, including Raju Parsekar’s ‘Police Lines – Ek Purna Satya’. The model has films like Atpadi Nights, The Story of Paithani, Man Fakira and AB&CD. Let us inform that after Ruturaj’s comment on this photo of Sayali, the news of the affair between these two had gained momentum.

In this post, Sayali was sitting on a couch. Ruturaj commented on this picture- ‘Voha.’ The Marathi actress replied to the comment with some heart emoticons. This conversation between the two was enough for their fans to speculate that they are in a relationship. 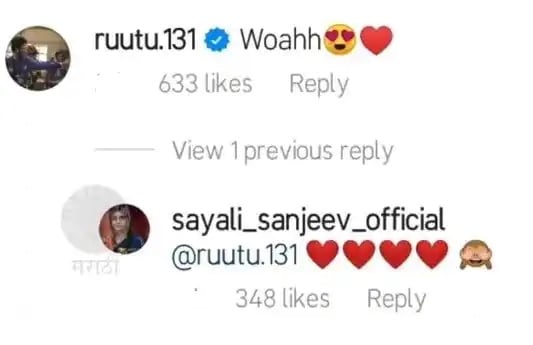 However, after the news of the affair with Sayali Sanjeev, Ruturaj Gaikwad wrote in his Insta story that only a bowler can clean bowl his wicket. Gaikwad wrote in Marathi, “My wicket can only be taken by bowlers, that too clean bowled. No one else. And whoever wanted to understand, he understood.

At present, Ruturaj is very busy in the current season of IPL. Although. CSK have qualified for the playoffs but they will look to win the remaining two matches and hope to finish in the top 2. The team led by Mahendra Singh Dhoni will play Punjab Kings on 7 October.