New Delhi. The International Cricket Council (ICC) on Tuesday released a list of 4 players, one of whom will be chosen as the best Test cricketer of the year. However, there has been a ruckus in Pakistan since this list came to the fore. Because the players shortlisted by the ICC include a single player from Pakistan.

After this, sports journalists and fans of Pakistan started raising questions on this. India’s off-spinner R Ashwin, England captain Joe Root, New Zealand’s Kyle Jameson and Sri Lanka’s Dimuth Karunaratne are included in this list. But this year, two Pakistan fast bowlers, Shaheen Shah Afridi and Hasan Ali, who bowled brilliantly in Tests, did not get a place in the nomination.

ICC On this nomination list, Pakistan sports journalist Saj Sadiq tweeted, 4 players were nominated for the ICC Test Player of the Year – “Joe Root, R Ashwin, Kyle Jameson and Dimuth Karunaratne. I am surprised that after Ashwin this year, Shaheen Shah Afridi, who took the highest 47 wickets in Tests, is not named in this list. Pakistani fans raised questions on ICC
Another sports journalist from Pakistan, Arslan Siddiqui, also raised questions on the ICC’s nomination. He tweeted, Shaheen Shah Afridi Bowled brilliantly in 2021. Took 47 wickets in 9 Tests. He is also the second highest wicket-taker this year after Ashwin. Still, he was not considered worthy of nomination. This thing is really surprising. Hassan Ali’s name is also in this list. While he has taken a total of 41 wickets in 8 matches at an average of 16.07. His average is even better than Ashwin (16.67) and Shaheen Afridi (17.06). 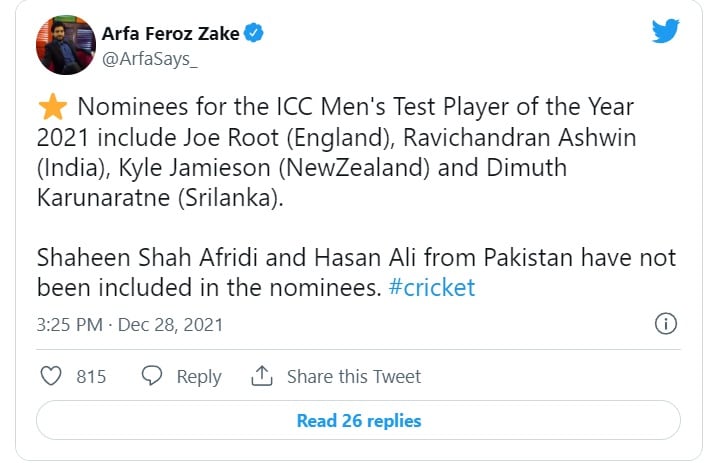 Ashwin took 52 wickets so far in 2021
According to the ICC, Ashwin has taken 52 wickets in 8 matches this year. Apart from this, he has also scored 337 runs at an average of more than 28. It includes a century. Recently, Ashwin took 14 wickets in 2 matches of the home series against New Zealand and he became the third bowler to take the most wickets in Tests for India.

ICC Test Player of the Year: R Ashwin in the race for the best player of the year, he will compete, see list

Root scored 6 centuries this year
Joe Root’s name is also included in this list of ICC. Root has scored 1708 runs in 15 matches this year. He has scored 6 centuries in this calendar year. Apart from this, he has also taken 14 wickets. The ICC has considered his innings played in Galle against Sri Lanka, Chennai against India and Lord’s as the best. At the same time, Kyle Jameson has taken 27 wickets in 5 matches at an average of 17.51. At the same time, 105 runs have also been scored. Sri Lanka’s Test captain Dimuth Karunaratne scored a total of 902 runs in 7 matches in 2021 at an average of 69.38. He has also scored 4 centuries this year.