New Delhi. In the last few years, there have been many such players in Pakistan Cricket, who became stars overnight on the basis of their game and then disappeared at the same speed. Umar Akmal is also one of those players. However, his name is now getting more headlines for the wrong reasons. He recently shared a picture of his US trip on Twitter, after which people trolled him badly. Many fans have even written that please do not come back now. Umar was banned for 1 year by the Pakistan Cricket Board for not giving information about spot-fixing. Later, Akmal was allowed to play club matches.

Akmal shared a picture from his Twitter account. In this, he was seen sitting in the flight and together he also shared his ticket. After this he wrote that I am going to America for personal work and if the meeting goes well then I will have to stay there for some time. I want all my well wishers and fans to pray, as they have always been doing. He had to write so much and the fans started trolling him. One user wrote that please do not come back to Pakistan. One wrote that you stay there. 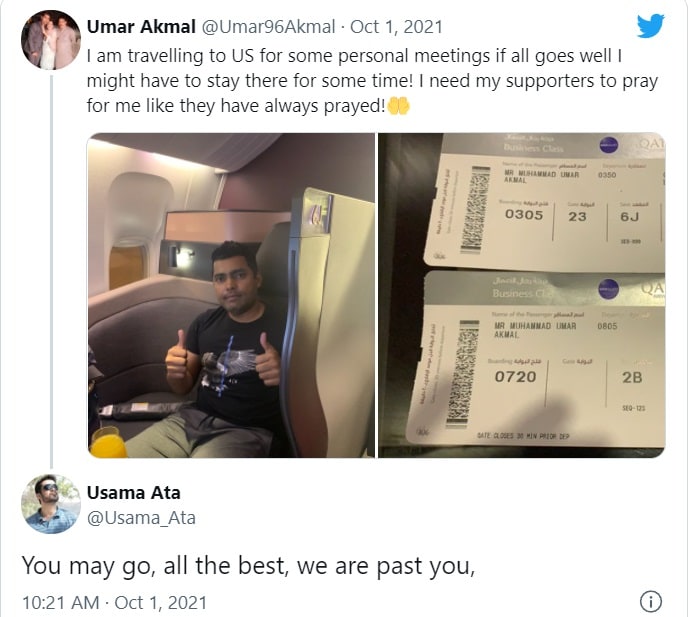 Akmal apologizes to PCB
Some users also speculated that Umar Akmal has gone to America to play in the Major Cricket League. In July this year, Akmal apologized for not reporting the spot-fixing incidents in the Pakistan Super League (PSL) to the PCB. He said in a video message that 17 months ago, I made a mistake, which damaged my cricket and career. I learned a lot during this and that mistake caused a lot of damage to the reputation of Pakistan cricket. I apologize to PCB and cricket fans around the world. Akmal admitted that this period was very difficult for him.

He further said in this video message that some people contacted me, but I was unable to report it to the Anti-Corruption Unit, due to which I had to face a 12-month ban. Despite being a cricketer, I could not play cricket. I learned a lot during this time. This time and today I accept in front of all of you that Pakistan cricket has been defamed by that mistake.