SRH made Warner out like a fly out of milk, this reaction of the cricketer created a ruckus

New Delhi: Sunrisers Hyderabad threw their former captain David Warner out of milk like a fly. In the IPL match against Rajasthan Royals on Monday, Jason Roy was given a chance by dropping David Warner from the playing XI. Warner has been seen struggling in IPL 2021, he has scored 195 runs in 8 matches played this season. He had to lose the captaincy in the middle of this season due to poor form and continuous defeat of the team. Kane Williamson has been given the command of the team in place of David Warner.

Warner was thrown out of milk like a fly

A very strange situation was seen in the match played against Rajasthan Royals in Dubai on Monday. David Warner was not present in the dugout with the rest of the team, and this thing caught the attention of the fans. After this a fan asked the question on Sunrisers Hyderabad’s Instagram post that Warner is in the stadium, we did not see him? To which Warner gave a shocking answer. Warner replied to the fan, ‘Unfortunately, it will not happen again but please keep supporting.’ 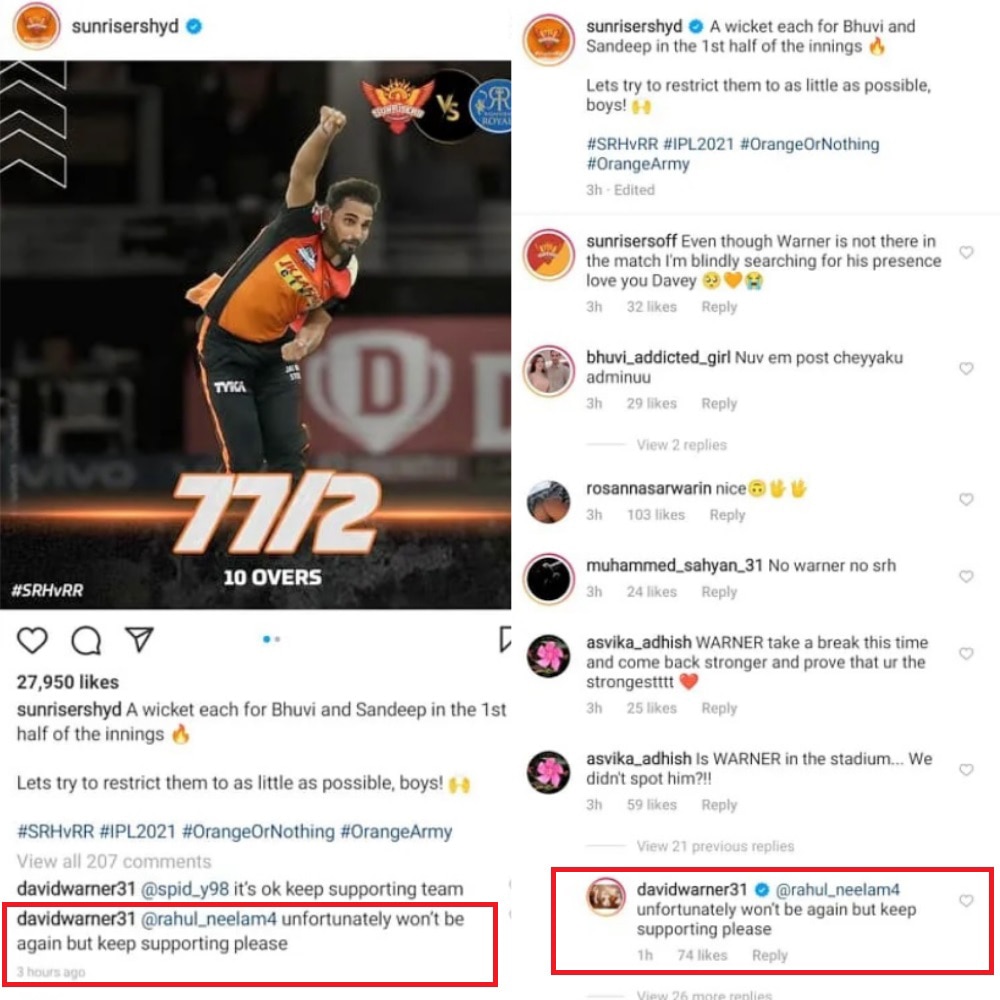 This comment of Warner surprised from the fans of Hyderabad to the commentators. He stayed in the hotel with Kedar Jadhav and Shahbaz Nadeem. This comment of David Warner caused a sensation and fans started speculating from his statement that he might be playing IPL for Sunrisers Hyderabad for the last time.

David Warner finding hard to get a place in Sunrisers Hyderabad team is disheartening to see. He’s been carrying his batting for long, gave his all for the team, but it seems he isn’t allowed to have an off season. Gotta feel for him. Man loves IPL, but isnt going well.

So it’s almost confirmed, David Warner going to mega auction unless he has a great T20 World Cup for Australia, with many teams need a captain, it will be interesting to see Warner in the auction.

Most times Top-scoring for the team in IPL:-

Welcome David Warner u must come to #RCB in mega auction@davidwarner31 pic.twitter.com/Wl25e7wIw9

Won the title under the captaincy of Warner

What was the reason for his removal from captaincy?

The reason for Warner’s removal from the captaincy is believed to be the wrong decision in the match against Delhi. In fact, on April 25, in a match of the initial phase of IPL, Sunrisers Hyderabad team lost to Delhi in the Super Over. After the defeat, questions arose on David Warner’s decision when he did not send Jonny Bairstow to start the innings in the Super Over. This decision was questioned by many veterans including Sehwag. After the defeat against Delhi Capitals, David Warner had said that dropping Manish Pandey was a tough decision of the selectors. Warner said that in the end, it is a decision that he took. The Sunrisers Hyderabad team management did not like his statement and Warner lost the captaincy.