New Delhi. West Indies team has gone on a tour of Sri Lanka for the 2-Test series. The first Test of the series (Sri Lanka vs West Indies 1st Test) started between the two countries in Galle from today. But on the very first day there was a big accident on the field. Jeremy Solozano Injured, making his debut for the West Indies, was injured while fielding at forward short leg. After this he was taken out from the field on a stretcher. This incident happened in the 24th over of the match.

This over was bowled by West Indies spinner Roston Chase and the Sri Lankan captain was on strike. Dimuth Karunaratne Were. The fourth ball of Chase’s over was a bit short. Dimuth hit a strong pull shot on this. The ball went straight on the helmet of Solozano, who was fielding at forward short leg. Karunaratne played such a strong pull shot that the back of Solozano’s helmet came off and he fell to the ground.

UPDATE: Jeremy Solozano is conscious and responsive. He is being taken to a hospital for scans. Team management are rightfully taking all precautions. #SLvWIpic.twitter.com/iUHLXFTjzi

Solozano carried off the field on a stretcher
As soon as Solozano fell to the ground, Physio rushed to the ground and gave him first aid. His head was pressed with a towel. at that time West Indies Cricket Team The nervousness could be clearly seen on the faces of the entire team and Sri Lankan batsmen. Seeing his players getting injured, coach Phil Simmons also immediately reached the field from the dressing room. However, even after Physio’s treatment, there was no significant improvement in Solozano’s condition. After that he was taken to the hospital. 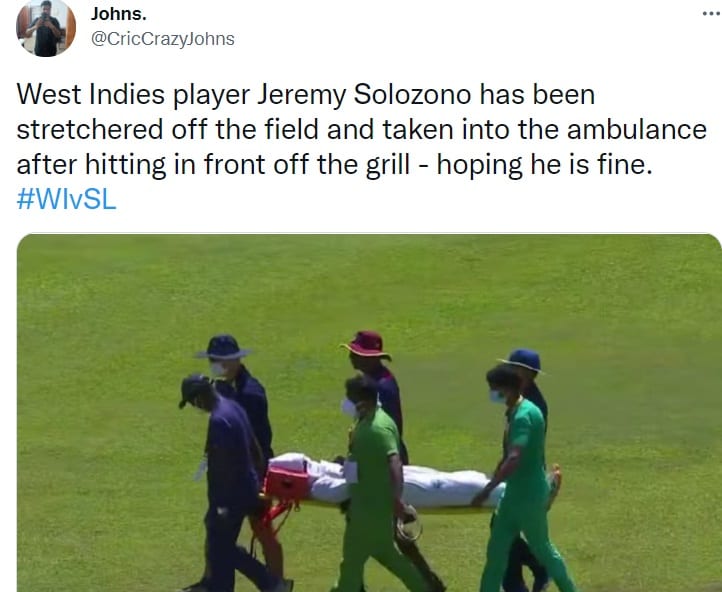 IND vs NZ: Before the Test series, Ashwin-Akshar was ‘warned’ by the Kiwi batsman, made a special plan

Sri Lanka captain’s fifty
In this test match, Sri Lanka’s captain Dimuth Karunaratne won the toss and elected to bat first. Captain Karunaratne and Pathum Nishanka made a great start for Sri Lanka. Both completed half-centuries. For the first wicket, there was a partnership of more than 100 runs between these two batsmen.