New Delhi. Scotland’s team is playing the first round match in the T20 World Cup. The team has also won both its opening matches of the first round (T20 World Cup 2021). In this way, the chances of the team reaching the Super-12 have increased. Meanwhile, people will be surprised to hear that the team’s jersey has been prepared by 12-year-old Rebecca Downie. The Scotland Cricket Board itself has given this information. The team defeated PNG by 17 runs in their second match on Tuesday.

Cricket Scotland shared Rebecca Downey’s photo on social media, writing, “Kit designer from Scotland, 12-year-old Rebecca Downey from Headington. She was watching our first match on TV. Proudly wearing the jersey which she designed herself. Thanks again to Rebecca.’ After this message, many people were seen congratulating Rebecca on social media. One fan wrote, “Best kit of the tournament.” The ICC has also congratulated Rebecca. 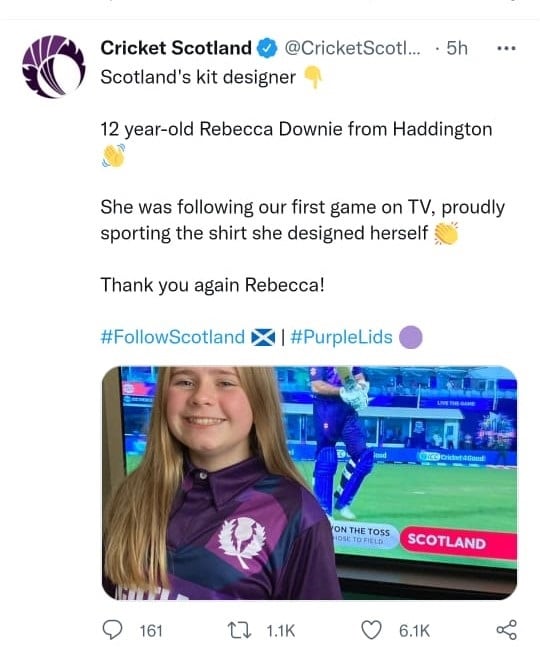 Scotland registered its second consecutive win in the tournament. The team defeated Papua New Guinea (PNG) by 17 runs in the qualifier match. The team has reached the top of Group B with 4 points. Scotland scored 165 for 9 in 20 overs, thanks to Richie Berrington’s brilliant innings of 70 runs. The PNG team tried well, but the team could only reach 148 runs. Richie Berrington hit 6 fours and 3 sixes in 49 balls. He shared a 92-run partnership with Matthew Cross (45) for the third wicket and laid the foundation for Scotland’s challenging score.

Also read: T20 World Cup: KL Rahul said – There can be no better mentor than Dhoni, I will also learn captaincy

Earlier, Scotland had defeated Bangladesh by 6 runs in their first match. With the defeat, the path of Bangladesh team to reach the Super-12 has become difficult. Before the World Cup, the team had defeated Australia and New Zealand at home.

BCCI President Sourav Ganguly says we have time to decide team India tour of South Africa after emergence of the new COVID 19 variant...

BCCI President Sourav Ganguly says we have time to decide team India tour of South Africa after emergence of the new COVID 19 variant...

Which team retained which player for how much rupees? Check out the full retention list here. Hindi News,