New Delhi. Team India’s jersey has been launched for the T20 World Cup 2021. The matches of the tournament are to start from October 17. But still the most discussion is happening about Hardik Pandya. He did not bowl during IPL 2021. In such a situation, questions are being raised about his fitness. The team has to play the first match on October 24. There is 10 days left, but no update has been given about Pandya’s bowling yet. How important Pandya is to the team as an all-rounder can be understood from this record.

Hardik Pandya is known for hitting big shots and as a fast bowler gives balance to the team. Looking at the international T20 record since January 1, 2017, Pandya is still at number two in the list of all-rounders who have scored wickets and more than 400 runs, while he has been bowling less in international cricket for the last one year. Bangladesh’s senior player Shakib Al Hasan, however, is on top with 41 wickets. During this, Glenn Maxwell of Australia has scored 958 runs. 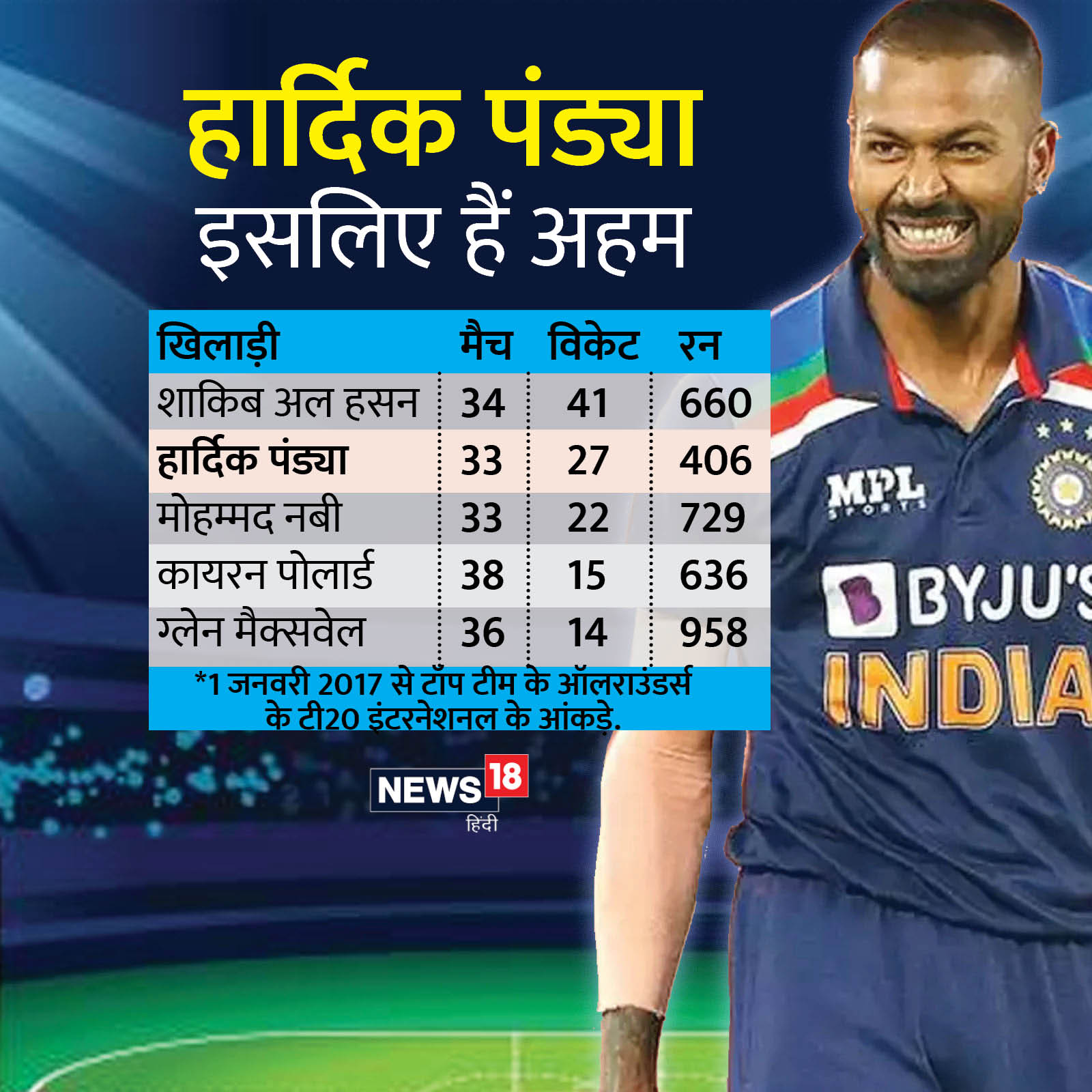 Got a chance to bat in 26 innings, returned unbeaten 8 times

Hardik Pandya got a chance to play in 33 T20 International matches in the last 4 years. During this, he came out to bat in 26 innings and remained unbeaten 8 not out. Scored 406 runs at an average of 23. Played the biggest innings of 42 not out. During this, his strike rate is 147, which was excellent in terms of T20. Hit 20 fours and 26 sixes. During this, he remained at number 9 in the list of Indian players who scored the most runs.

28-year-old Hardik Pandya took 27 wickets at an average of 28 during this period. In the last 4 years, he is at number six in the list of Indian bowlers with the most wickets in T20 Internationals. His best performance is 4 wickets for 38 runs. Economy stood at 8.22. In this way, both bat and ball, Pandya has contributed significantly to the team in the last 4 years. The team has also won 22 out of 33 matches. That is, about 66 percent.

Also read: Team India will not get foreign coach! India’s 2 world champion players are in the race

Couldn’t do wonders in IPL

Most of the questions are being raised on Hardik Pandya because he could not do wonders in the current season’s IPL. Not only did he bowl, he also flopped with the bat. He could score only 127 runs in 12 matches at an average of 14. Played the biggest innings of 40 not out. The strike rate was only 113. Talking about his overall T20 career, he has scored 2728 runs in 170 matches at an average of 27. 8 fifties and strike rate is 141. While bowling there, he has also taken 110 wickets. The economy has been of 8.14.