New Delhi. In the T20 World Cup (ICC T20 World Cup 2021), Team India will be seen in New Jersey. BCCI gave this information through a post shared on its Twitter account. What will be the color of the new jersey? What would be special about it? At present, the BCCI has not told anything about this. However, on which day the new jersey of Team India will come out, the Indian Cricket Board has definitely told that date. The jersey of the Indian team will be launched on Wednesday 13 October i.e. next week.

Sharing the post, BCCI wrote that the moment we have all been waiting for! Join us for the big announcement on October 13th. Are you excited about it? Fans must be looking forward to the return of their favorite traditional blue jersey, which has been the hallmark of Team India for the past few years. Due to this blue jersey, the team is called ‘Men in Blue’. 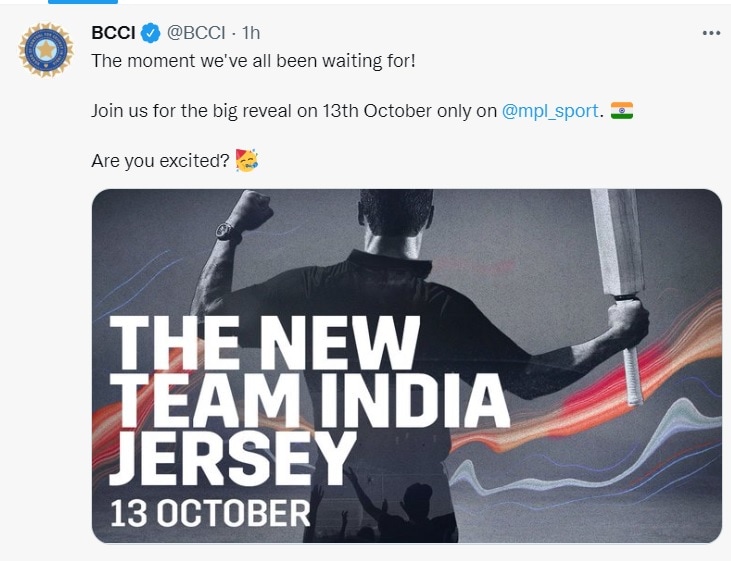 On which day Team India’s new jersey will be launched for T20 World cup 2021. The BCCI has given its date. (BCCI Twitter)

team india will wear new jersey
Let us tell you that the Indian team has been wearing a deep blue jersey since the tour of Australia last year, which exactly matches the 1992 World Cup jersey. Initially, it was the intention of the BCCI that this dark blue jersey should be used only in the T20 series against Australia. However, the Indian team used this jersey till the home series against England this year.

India’s first match against Pakistan
India’s opening match against Pakistan in the T20 World Cup to be held in UAE and Oman will be held on October 24. However, the first match of Super-12 will be played between Australia and South Africa on 23 October. Earlier, the top eight teams that directly qualified for the group stage of the tournament would play two warm-up matches on October 18 and 20. There will be a total of 4 matches every day.

T20 World Cup: Bio-bubble will not be heavy on players, ICC has prepared a special plan

The selectors made a mistake by not choosing these 3 players in the T20 World Cup! There is chaos in IPL

Team India will play 2 practice matches
India, Pakistan, Afghanistan, South Africa, England, Australia, New Zealand and West Indies are among the teams that have directly qualified for the group stage of the ICC T20 World Cup. These teams will play two matches each in the lead up to the Super 12 round of the tournament starting from 23 October. India will play its warm-up match against England and Australia.