New Delhi. Former India batsman and Punjab Kings batting coach Wasim Jaffer has praised America’s cricket team captain Saurabh Netravalkar. While praising Saurabh, Jaffer has said that even though he has become the captain of America, he has not forgotten his roots. While doing this tweet, Jaffer has also put a photo of a scene from the film ‘Dilwale Dulhania Le Jayenge’. This tweet of Jafar is being liked by the fans and they are also reacting fiercely to it.

Actually, it all started after micro-blogging site Twitter got a new CEO. Indian origin after the resignation of Jack Dorsey Parag Agarwal has been made the new CEO. There are many global companies of America, whose heads are Indians.

INDvsNZ: Rahul Dravid and the 3 Controversies of Declaring Innings: As Player, Captain And Now As Coach

In such a situation, Elon made a tweet. He tweeted that America is getting a lot of benefit from India’s talent. Musk made this tweet in response to a tweet by Stripe CEO Patrick Collison. Callison tweeted, Google, Microsoft, Adobe, IBM, Palo Alto Networks and now Twitter are run by CEOs raised in India. It’s wonderful to see a good reminder of opportunities. (Congratulations, Parag Agarwal).

On this, Elon Musk had tweeted on India’s talent, to which Wasim Jaffer had said that it is not limited to just tech companies but the captain of America’s cricket team is also an Indian. He had tweeted, both places – off the field and on the field. On this tweet of Wasim Jaffer, America’s national cricket team captain Saurabh Netravalkar replied. He tweeted and wrote- I still remember when you (Wasim Jaffer) got me the test cap of Ranji team. On this tweet of Saurabh, Jaffer tweeted the photo of Amrish Puri and Farida Jalal from a scene of ‘Dilwale Dulhania Le Jayenge’. It is written on this picture – this is our culture. Also, Wasim Jaffer wrote, America’s captain but did not forget his roots. 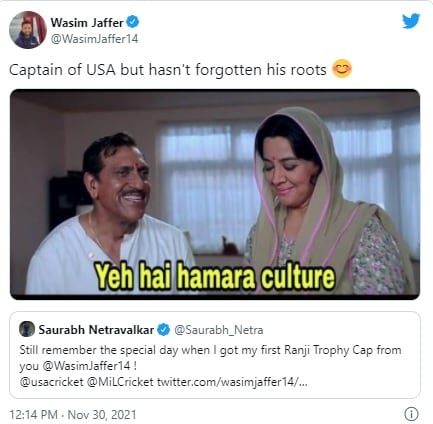 Saurabh Netravalkar is Indian by origin. He has also been a part of India’s Under-19 cricket team. Saurabh is a left arm medium pace bowler and is currently captaining the US national team.